Could domestic violence aggressors put themselves in their victims’ shoes? What happens in the brain of a victim of intimate partner violence? Whereas these questions are certainly challenging to answer—for technical and ethical reasons—, the authors of a recent article published in the journal eNeuro gave insights into this subject by having healthy volunteers without a history of violence take part in a study combining immersive virtual reality and functional magnetic resonance imaging (fMRI).

This study, conducted as a collaboration between institutions in the UK (University College London), Spain (IDIBAPS and University of Barcelona) and the Netherlands (Maastricht University), looked at the synchronized activity of brain networks while participants observed a 3D video of a domestic violence scene, after having experienced in immersive virtual reality one of two conditions: (a) they were embodied in a virtual female character about to be abused (first-person perspective) or (b) they were an observer (third-person perspective). In this way, the authors aimed to determine whether embodying the victim, as opposed to being an observer, before watching a scene of domestic violence, increases the identification with the victim and triggers brain activation patterns associated with the bodily self and the surrounding space—the peripersonal space—as well as with the experience of threat.

The first step was entering immersive virtual reality, specifically a virtual hallway of a house, using a head-mounted display. In the first-person perspective, the participants embodied a virtual female character, that is, they were inside the body of a woman, which they could see if they looked downwards and also reflected in a mirror in front of them. The virtual female body moved synchronously with the participant’s real movements, achieved via sensors on the participant’s body that detected their real movements. In the third-person perspective, participants did not have a virtual body but could see a virtual woman and her reflection in a mirror in front of her. After being primed with the first- or the third-person perspective, the head-mounted display was removed, and participants were blindfolded and walked into an fMRI scanner where their brain activity was recorded while they viewed a scene of domestic violence experienced from the perspective of the victim.

In this video scene, a man came into view in the same hallway where they were previously standing in immersive virtual reality, except now this happened in a 3D video inside the fMRI scanner. The man began yelling and humiliating the woman as he approached her. In the scanner, the stimuli were identical in the first- and in the third-person conditions; the only difference was what had previously occurred in immersive virtual reality.

The authors found that, when primed by a first-person perspective in immersive virtual reality, the brain seemed to perceive the scene of domestic violence as if it were happening to oneself, since the fronto-parietal network, i.e. the brain network involved in the representation of the bodily self and the surrounding space, showed more synchronized activity across participants in the first-person condition (see figure). Moreover, synchronized activity in the amygdala—a brain area consistently associated with the processing of fear—was strongly correlated with a threatening event in the 3D video, in particular when the aggressor approached the victim. 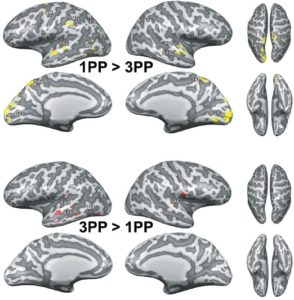 The authors concluded that first-person perspective embodiment in immersive virtual reality enables people to identify with the virtual victim through increased connectivity in the fronto-parietal network responsible for the representation of the bodily self and its surrounding space. This study highlights the potential of immersive virtual reality tools to enhance empathy in situations that we may not necessarily experience ourselves in real life by temporarily enabling our brain to feel we are the character we embody in the virtual world.