Recent research has provided evidence for the benefits of immersive virtual reality for the rehabilitation of intimate partner violence offenders. A recent study showed that batterers can better recognize the expression of fear after being the victim of domestic violence in virtual reality, and also that their bias towards classifying fearful faces as happy declines after being the victim (Seinfeld et al., 2018). But what are the mechanisms? Is simply the fact of being in a virtual world and watching a scene of intimate partner violence enough to induce these changes, or does one have to be the victim of such a scene?

This question was recently addressed by a study that used immersive virtual reality to provide two separate experiences. For this study, men without a history of violence were recruited and assigned to one of two conditions: in the first-person condition, participants experienced a scene of intimate partner violence from the perspective of the female victim, whereas in the third person-condition, they experienced the same scene but as an observer without a body (see figure, top). Once in the virtual environment, either with the body of the woman or as an observer, participants saw a male avatar enter the virtual hallway where the victim was standing and he started verbally abusing her and approaching her in a threatening manner (see figure, bottom). 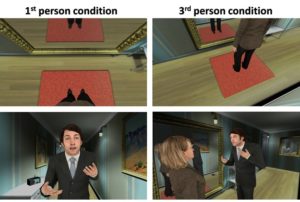 The results of the study showed some differences and some similarities between both conditions. In terms of behavior, almost 70% of participants in the first-person condition spontaneously spoke during the abuse scene, while 0% of participants in the third-person condition did so. Those in the victim’s shoes also felt they could be physically assaulted and that they were being addressed personally to a greater extent that did those in the third-person condition. In both groups the prejudice against women decreased and both groups showed a physiological reaction to threatening events in the virtual scene, corroborating that people tend to react realistically to events in virtual reality. Moreover, the study reported, in all participants, a relationship between the magnitude of the physiological reactions and their subjective impressions of the experience, and between how much they identified with the woman and the decrease in prejudice against women. Finally, experiencing the virtual scene from the victim’s perspective facilitated the identification with the victim and induced a sensation of fear, helplessness, alertness and vulnerability, which is likely the reason for which participants in the woman’s shoes tended to react more to the scene, in terms of behavior and physiology, and scored (or tended to score) higher in a questionnaire addressing aspects of the virtual experience such as embodiment (the illusion of owning the woman’s body) and presence (the illusion that what happens in virtual reality is actually  happening).

Based on these findings, the authors concluded that the potential of this virtual reality paradigm for the rehabilitation of intimate partner batterers originates from being immersed in the virtual environment—more specifically, feeling that what happens in virtual reality is actually happening and identifying with the victim—, which in turn is more easily, but not exclusively, achieved when participants live the experience from the first-person perspective. In other words, the authors resolved, the extent to which participants felt that they were part of the scene seemed to contribute more to the potential of this virtual abuse scene rather than only the perspective from which they experienced it.

VRperGenere press release on the website of the University of Jyväskylä