With immersive virtual reality (VR), one can temporarily be another person or character. Current technology enables VR users to not only enter a virtual world, but also to embody, or “feel that they are” a virtual avatar. This feature—embodiment—has been shown to decrease racial bias in light-skinned people when they embodied avatars with darker skin (Peck et al., 2013) and to change the perception of object size when adults embodied virtual child avatars (Banakou et al., 2013). Since this ability to temporarily change our bodies produces changes in how we perceive the world, could it also be used to put violent people like intimate partner batterers in the shoes of their victim?

The answer is yes and the results are promising. The authors of a study published in 2018 in the journal Scientific Reports put, for the first time, perpetrators of intimate partner violence in the shoes of a female victim.

The authors recruited a group of men who were violent against their intimate partner (offenders group) and another group of men without a history of violence (control group). Each participant donned a head-mounted display through which they entered a virtual environment, and found themselves in the hallway of a virtual house. They stood on one end of the hallway and an entrance door was at the other end of the hallway. Their virtual body, however, was not that of a male but rather that of a female avatar. They could look down to where their real body would be and instead saw the body of a woman; they could also see their reflection as a woman in a mirror that was on the wall right in front of them. If they moved in real life, so did the virtual woman in the same way (this was achieved using a body tracking suit) (see figure, a and b). 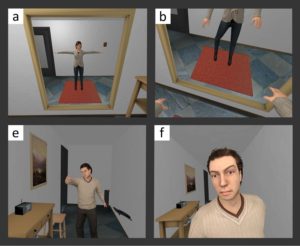 Figure: The immersive virtual reality scenario. (a) The participant looks at his female virtual body in the mirror and (b) down towards his own body from a first-person perspective. (e) The virtual abuser throws a telephone on the floor and (f) invades the personal space of the participant. Figure obtained and adapted with permission from Seinfeld et al. (2018).

Then, embodied as a woman, they saw a man enter the door. He started verbally abusing the virtual woman, telling her things like that she looks 20 years older, that he doesn’t see any woman that looks as bad as her in the street, that she disgusts him, and so on. The virtual man eventually approached the woman threateningly as he went on speaking in a hostile manner, saying things like that she doesn’t deserve the food she eats, that it’s all his fault for not having “beaten her up” back then “so they wouldn’t be like they are now”, and so forth (see figure, c and d). The script was carefully written by psychologists and other scientists to try and depict what such a situation could potentially be like in real life.

Before and after the virtual experience, all participants completed an emotion recognition test. What the authors of the study found was that, at baseline (before the VR experience), offenders had more difficulties recognizing fear in female faces than did controls, and they also tended to classify (male and female) fearful faces as happy. After being the victim in VR, offenders improved their recognition of fear in female faces and reduced their bias towards classifying (male and female) fearful faces as happy. The authors observed no change in the control group. It is interesting to note that the deficit of offenders at baseline was in particular the recognition of fear in female but not in male faces, and that this deficit was amended by being the victim in VR.

The authors concluded that VR can be used to modify socio-perceptual processes like emotion recognition, which in turn can affect higher order socio-cognitive processes and even behavior. This VR design, they reckon, can be used as an additional tool to rehabilitate intimate partner violence offenders.